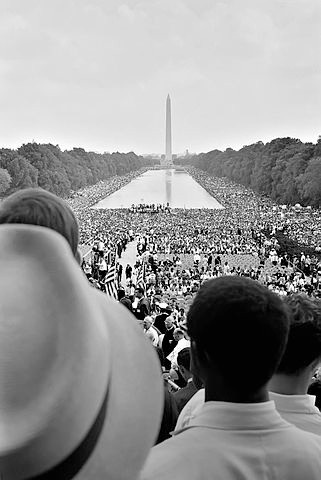 March on Washington 1963 (Library of Congress)

Two Poems and a Photograph

The poems deal with the situation of Blacks in the United States in the middle of the 20th century.

1.What metaphors are used in "Harlem"and „To a White Girl“ to describe the situation Blacks are in? What is expressed through these metaphors?

2.What are the political "messages" of the poems?

3.Find out about the background of the photograph with the Olympic Black Power salute.

What happens to a dream deferred?
read more

Eldridge Cleaver, To a White Girl

I love you
Because you‘re Whiteread more

tap here for the photograph

1.Describe the aspects of the black experience that are dealt with in the texts.

Malcolm X, from: Message to Grassroots

„ There was two kinds of slaves. There was the house Negro and the field Negro.“Search for the above text and continue reading up to „you left your mind in Africa.“read more

Eldridge Cleaver, from: Soul on Ice

„Let us recall that the white man, in order to justify slavery and, later on, to justify segregation, elaborated a complex, all-persuasive myth which at one time classified the black man as a subhuman beast of burden. The myth was progressively modified, gradually elevating the blacks on the scale of evolution, following their slowly changing status, until the plateau of separate-but-equal was reached at the close of the nineteenth century. During slavery the black was seen as a mindless Supermasculine Menial. Forced to do the backbreaking work, he was conceived in terms of his ability to do such work - "field niggers", etc. The white man administered the plantation, doing all the thinking, exercising omnipotent power over the slaves. He had little difficulty dissociating himself from the black slaves, and he could not perceive of their positions being reversed or even reversible.The ideal white man was one who knew how to use his head, who knew how to manage and control things and get things done. Those whites who were not in a position to perform these functions nevertheless aspired to them. The ideal black man was one who did exactly as he was told, and did it efficiently and cheerfully. "Slaves", said Frederick Douglass, "are generally expected to sing as well as work." As the black man's position and function became more varied, the images of white and black, having become stereotypes, lagged behind.“watch Eldridge Cleaver

„Blackmen born in the US. and fortunate enough to live past the age of eighteen...“Go to „Recent letters and an Autobiography“ and read the first four paragraphs.read more

watch the story of George Jackson 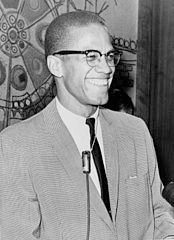 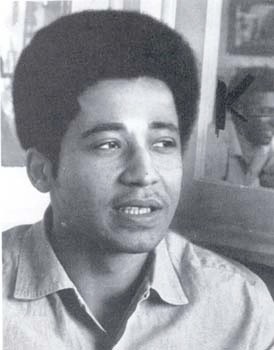 2.Organize the information you found.

3.Prepare an electronic presentation using either Powerpoint (or a similar program) or an HTML-Editor (to create web-pages). You could also consider a blog.Your presentation should include text, pictures, audio, video and hyperlinks. Make sure you don't break copyright laws. Use hyperlinks to audiovisual material whenever possible. Don't forget to quote your sources!

Multimedia presentations may be produced by using different tools. You can use presentation software like LibreOffice/OpenOffice Impress, Apple Keynote or Microsoft Powerpoint. You can also work online, e.g. with Google Docs (https://docs.google.com). Here it doesn‘t matter which operating system you use and you can collaborate, i.e. many people can work on the same document.

2.There is also a film about Malcolm X (1992) directed by Spike Lee. You might want to use that movie as an additional source of information.

3.Watch the videos,listen to the audio files and read the texts.

Collect information about his biography, the role he played in the Black Power movement and his main political ideas.

http://www.brothermalcolm.net/ One of the most important sites on Malcolm X: plenty of information, photographs, speeches, writings. Unfortunately all speeches are in the ra-format (real audio) which won‘t play on the iPad. You will have to download and convert them if you want to listen to them.

http://teachingamericanhistory.org/library/index.asp?document=1145 Transcript of „Message to Grassroots“ (1963)

2.Watch the videos, listen to the audio files and read the texts. Collect information about his biography, the role he played in the Black Power movement and his main political ideas.

You can find more of this documentary on Youtube

2.Watch the videos, listen to the audio files and read the texts.

Collect information about his biography, the role he played in the Black Power movement and his main political ideas.

http://www.youtube.com/watch?v=tdi-NNfUF3A (5 min)Cleaver gives a speech to an all white audience (1968)

1.Get and organize some background information on the Black Power Movement of the 1960s.

http://www.lib.berkeley.edu/MRC/pacificapanthers.html Another website dealing with the Black Panther Party

http://www.dailymotion.com/video/x28ijn_the-revolution-will-not-be-televise_music Gil Scott Heron, The Revolution will not be Televised

1.Present the results of your net activities to the class. Each group has 30 minutes. Make sure that all group members play an active part.

2.Save your results (in electronic form) and make them available to the other students.